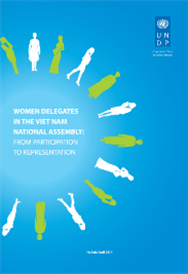 Women delegates in the Viet Nam National Assembly: from participation to representation

Viet Nam has made efforts to increase representation for women, particularly in the National Assembly (VNA). Prior to the 2007 and 2011 elections, the Fatherland Front and the Central Election Council sought 30 percent female representation. While only 28 percent of the assembly elected in 2007 and 24 percent in 2011 were women, female representation nonetheless remains a concern for the party and government. The National Strategy on Gender Equality establishes gender equality targets in the fields of employment, education, health and public participation. For the VNA, the strategy targeted a minimum of 30 percent female representation from 2011-2015 and a minimum of 35 percent from 2016-2020. The targets are in line with the 1995 Beijing Platform for Action’s assessment that 30 percent is the “so-called ’critical mass’, believed to be necessary for women to make a visible impact on the style and content of political decision-making.” Despite the targets to increase the number of women in the legislature, little is known about how the women whom have won seats in the VNA perform their roles. Few studies have examined the positions women are selected to in the VNA or the way they perform their roles once selected. This is an important oversight because the research on the impact of female representation does not universally support the notion that greater numbers of women necessarily lead to legislation more aligned with the policy preferences of women (Waring 2010).